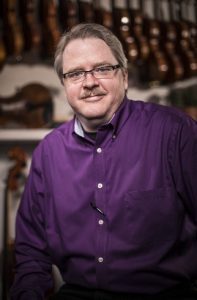 Jerry Pasewicz began his career making his first violin and bow in 1978. After spending time in violin making school, working in violin shops and owning his own shop, he was hired to direct the workshop at Shar Products in 1988. At Shar he worked alongside multiple award-winning violinmaker and former Weisshaar foreman David Burgess, gaining crucial experience in the restoration of violin and bows. In 1992, armed with this experience, he was hired as an instrument restorer at the famed Jacques Français Rare Violins in New York, under the direction of renowned restorer René Morel. In the Français workshop Mr. Pasewicz not only had the opportunity to work on the finest instruments and bows in existence, but also to work for some of the world’s finest musicians. He continued working under the direction of Maestro Morel for two and a half years, and continued doing work for Jacques Français until leaving Manhattan in 1998. During his time in New York, Jerry Pasewicz also had the honor of serving a bow making apprenticeship with multiple gold medal-winning maker David Samuels.

Mr. Pasewicz has been a participant in the Oberlin workshops since 1997. He has been a director and instructor in the bow making and restoration workshop at Oberlin since 2000, and has been on the faculty of the instrument set up workshop from 2004-2006.

Mr. Pasewicz has been a presenter and lecturer at The Violin Society of America conventions, has served as Vice President of the VSA from 2008-2014, and served as chairman of the VSA International Violin and Bow Makers Competition from 2006-2014. 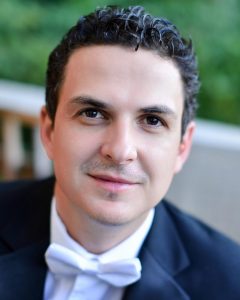 Cristian Fatu is currently a freelance violinist based in Los Angeles, California. Between 2014-2018 he was the first violinist of the Montclaire String Quartet, Adjunct Faculty at the West Virginia State University and concertmaster of the Charleston Chamber Orchestra. He is a top prize winner at more than 25 national and international violin competitions in his native Romania and abroad including First Prize at the 2008 Kingsville International Competition, TX and the Grand Prize and First Prize at the 2000 “Remember Enescu” International Violin Competition, Romania. He has built a significant career of recital, concerto, music festival and chamber music appearances in the US and Europe including the Music Celebrations International Festival at Carnegie Hall, New York City; the International Summer Academy PragWien-Budapest in Austria; and the Kyoto International Music Students Festival in Japan, among others. The Murnauer Tagblatt in Germany praised his “wonderful virtuosity as well as perfect technique.” Since 2013 he is a member of the Violin Society of America Oberlin Acoustics Workshop where he explores the physics of string instruments with fellow musicians, scientists and violin makers. Cristian holds a Bachelor’s degree from the National Music University of Bucharest, a Master’s and an Artist Diploma from Park University, MO where he studied with Ben Sayevich. His teachers and coaches include Gil Shaham, Stefan Gheorghiu, Eric Rosenblith, Shmuel Ashkenasi, Gabriel Croitoru and Vladimir Spivakov, to name a few. Cristian is married to the pianist and jazz singer Victoria Martirosyan – Fatu and together they have three children Mark, Vivienne and Sophie who at only five years of age became the youngest contestant in the history of NBC’s America’s Got Talent delivering memorable performances of Sinatra’s top hits.

Declared a “great talent” by Eugene Fodor, William Wolcott’s passion for the violin has taken him from coast to coast, studying under some of the greatest and most famous violinists and teachers in the world, including protégés of the Dorothy Delay, Ivan Galamian and Jascha Heifetz studios. His instructors include Eugene Fodor (concert violinist and winner of the International Tchaikovsky and Paganini Competitions – and former student of Heifetz), David Updegraff (Professor of Violin at the Cleveland Institute of Music), Sergui Schwartz (accomplished concert violinist and protégé of Dorothy Delay), and Dr. Wilfred Biel (Drake University violin professor and 15 year Galamian student). In addition, Mr. Wolcott has performed in master classes with Jaime Laredo (concert violinist, professor, Curtis Institute) and Oleh Kryssa (concert violinist, professor, Eastman School of Music) and has received private coaching from the late Israel Baker (renowned Los Angeles studio violinist and chamber music partner of Jascha Heifetz). In the summer of 2011, Mr. Wolcott attended the Starling-DeLay Symposium at The Juilliard School, a 5 day event entitled “Teaching Excellence,” in which he attended master classes by noted violinists and pedagogues Itzhak Perlman, Glenn Dicterow, Ida Kavafian, Joseph Lin, and David Updegraff.

Mr. Wolcott’s commitment to excellence is equally demonstrated in his dedication to his students. Since returning to Omaha in 2003, his students have held principal positions in all Omaha Area Youth Orchestras, have captured first prize in the OAYO and Orchestra Omaha Concerto Competitions, have been soloists with the Omaha Symphony, Omaha Area Youth Symphony, and Orchestra Omaha, and have won the Nebraska Young Artist Award, and many have gone on to pursue successful careers in music. Mr. Wolcott has held teaching positions with the Omaha Conservatory of Music and the University of Nebraska at Omaha.

Mr. Wolcott’s abilities as a performer as well as his studies with violinists and teachers of international repute work synergistically to provide students with both knowledge and example. Mr. Wolcott strives to make learning the violin fun and exciting while maintaining the highest quality standards of teaching and performing. After many years of training, he has developed his own holistic teaching process based on the unlimited potential of every human being who has a strong desire to learn. His enthusiastic approach instills a sense of confidence in his students, providing a strong foundation for future challenges in all aspects of life. Mr. Wolcott continues to share the knowledge he has acquired with students of all ages, levels, and abilities in a manner that is disciplined and challenging, yet positive and inspirational.

Don't miss out on this event! Sign up now for this year's convention and get those instruments ready for the competition!